I predict that this could become the future of phones.
Posted by John Coffey at 11:55 AM No comments: 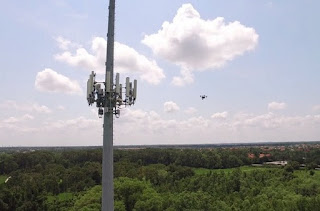 http://www.entertainmentjourney.com
Posted by John Coffey at 12:17 PM No comments:

A couple of days ago, Apple introduced their products at the brand new Steve Jobs theater, at their new Apple Park campus. I thought that the first ten minutes of the video were pretty interesting, including at 4:24 a quote from Steve Jobs I hadn't heard before.
https://www.apple.com/apple-events/september-2017/?cid=CDM-US-DM-P0018233-386372
--
Best wishes,

http://www.entertainmentjourney.com
Posted by John Coffey at 7:55 PM No comments:

re: Big announcements from our September event.

Since my iPhone 6+ works just fine and I am happy with it, I can't really justify spending hundreds of dollars on a new phone. I could be happy with either the iPhone 8 or the iPhone 10, but I would rather wait until something major goes wrong with my phone​ before I spend the big bucks.

​When I was working, I used to get a new phone with a new contract every 2 years. The upfront cost was relatively low, usually either $200 or $300, because the carrier would subsidize the ​cost of the phone​. ​ Many carriers won't do this anymore,​​but some companies like Sprint might. But right now I am saving $30 per month on Total Wireless, so I would have to pay an extra $720 over two years to get a subsidized phone.

One reason I bought a new phone every two years is that there would be some major changes every two years. However, now the phones have gotten so good that the changes are more incremental. The new phones always have a faster processor and a better camera, but this is hardly a reason to abandon your old phone.

Apple's 6 core processor is kind of exciting. Two high power cores with 4 low power cores, and unlike the previous phone, it can use all the cores at the same time. This rival​s​ some desktop computers in terms of power. ​ (Some competing brands of phones will allow you to hook up a monitor, keyboard and mouse and use it like an internet based computer. Microsoft Windows Phone does this, and I think so does the Google phone.)​

Posted by John Coffey at 1:21 PM No comments:

Things People Believed 10 Years Ago That Ended Up Being Wrong

https://www.youtube.com/watch?v=shbew3ajiOA
Posted by John Coffey at 7:08 PM No comments:

We are entering a new era where a phone can be a real computer.

We are entering a new era where a phone can be a real computer.
I think that this was inevitable.
http://www.pcworld.com/article/3065895/windows/windows-continuum-how-i-survived-a-week-using-a-windows-10-phone-as-my-pc.html
https://www.youtube.com/watch?v=OGBAqLv_IG8
In this department, Apple has refused to merge their mobile and desktop operating systems, which Microsoft has done and Google has started to do.  Apple would prefer that you spend big bucks to buy separate overpriced devices, but with newer phones becoming as powerful as some laptops, if not more powerful, why bother?
​
Best wishes,
John Coffey​
Posted by John Coffey at 7:02 PM No comments: